Just been reading The Island of Ignorance. 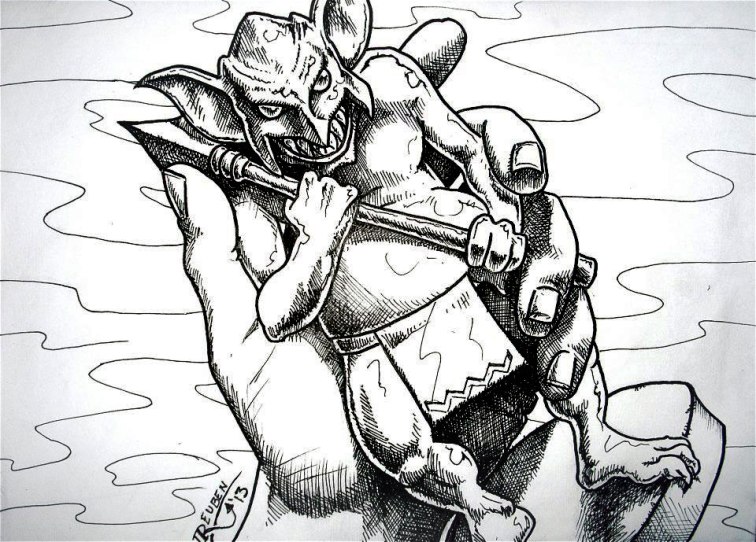 ‘The Golden Goblin is a creature inspired by the ctional Golden Goblin Press, a Cthulhu Mythos publisher created by Robert E. Howard, which was named after a statuette belonging to the Press’s founders. The creature is most com- monly encountered bound into a golden statuette of around eight inches tall. The history below covers the Goblin and the original statuette, and also the possibility that other statuettes were made with the same process and are scattered in the Americas.

The Golden Goblin Press and its mascot, a golden statue of a goblin said to be of Native American origin, rst appeared in Robert E. Howard’s Cthulhu Mythos stories, “The Black Stone” and “The Thing on the Roof ”. Howard invented Gold- en Goblin Press as the publisher of a bowdlerized version of the Unaussprechlichen Kulten. Other authors have offered further publications of the ctional press. A list can be found in Daniel Harms’s indispensable Cthulhu Encyclopedia. The most detailed history of Golden Goblin Press is in Stephen Marc Harris’s imaginative “The History of Von Unausspre- chlichen Kulten”. Dean Shomshak’s “Unspeakable Secrets Made Easy”, from Dragon Magazine 150, postulates one fate of the Addleton Brothers, the owners of Golden Goblin Press. Manly Wade Wellman’s story “The Golden Goblins” reveals a

Native American origin of similar creatures. Part of the back- ground of the Goblin was inspired by Howard’s other horror writing, including The Gods of Bal-Sagoth, “The Children of the Night”, and People of the Dark.